August Long Weekend 2015: Things to do in Vancouver

August Long Weekend is almost here and boy, we can’t wait to share some cool things that are happening in and around Vancouver. Get ready for sea monsters, burly loggers, flashing lights, beautiful harmonies, powerful celebrations and parades by the sea. Here are six events and activities that are bound to be fantastic.

This weekend will be perfect to visit the Vancouver Aquarium’s latest exhibit, Sea Monsters Revealed. Similar to the very popular human anatomy exhibits around the world, Sea Monsters Revealed shows dissected bodies of creatures from the deep sea using the revolutionary polymer preservation technique. This is definitely not an exhibit to miss out on! If you can’t make it this weekend don’t worry, it will be running until September 7.

The Celebration of Light is a staple summer activity in Vancouver and this year Canada’s team will be competing on August 1st. The amazing fireworks display starts at 10pm and is visible from multiple locations around Vancouver with the primary area being English Bay Beach. Along with the visual display there are Shorefest Musical Performances and the Sunset Beach Festival for you to enjoy!

You can also enjoy live performances at the Kitsilano Showboat Festival just on the other side of the Burrard Street bridge. Here is their events schedule.

Music, cinema, art, food, kids’ entertainment and more are on offer this weekend at the Harmony Arts Festival. The festival draws crowds from all over the Lower Mainland to celebrate a harmonious balance of visual, culinary and performing arts on the spectacular West Vancouver waterfront. The events take place on Argyle Avenue from 14th St. to 16th St. over the course of 10 days from July 31st to August 9th. 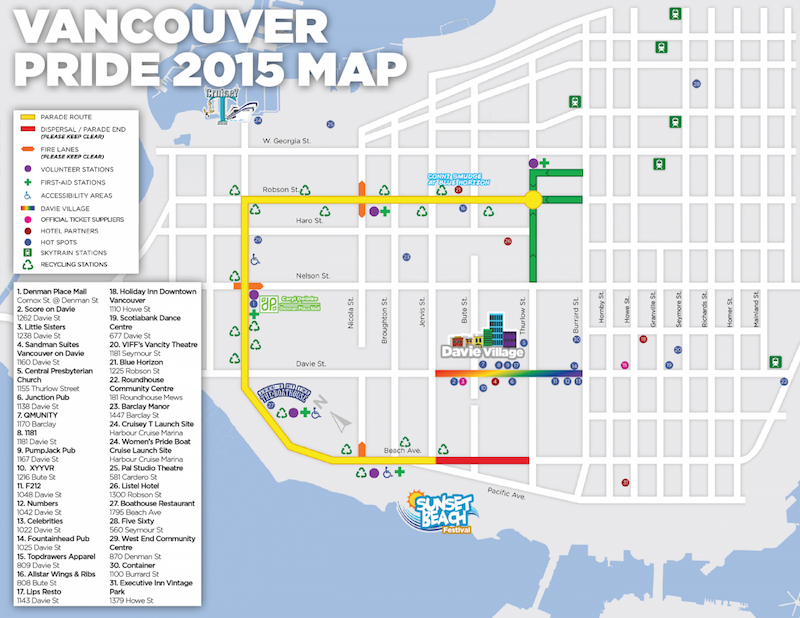 The Parade will begin at 12pm at the intersection of Robson and Thurlow and continues down Robson Street, Denman Street and Beach Avenue in downtown Vancouver’s West End neighbourhood. This years theme is gender superheros who inspire. This massive celebration is free of charge and draws some huge crowds of over 650,000 people.

Not in the city? That’s okay, White Rock has you covered. Checkout The Torchlight Parade taking place in White Rock on Sunday, August 2nd, 2015 between 9pm and 11pm from Oxford to Stayte Road (parade runs from West Beach to East Beach).

Check out the full schedule.